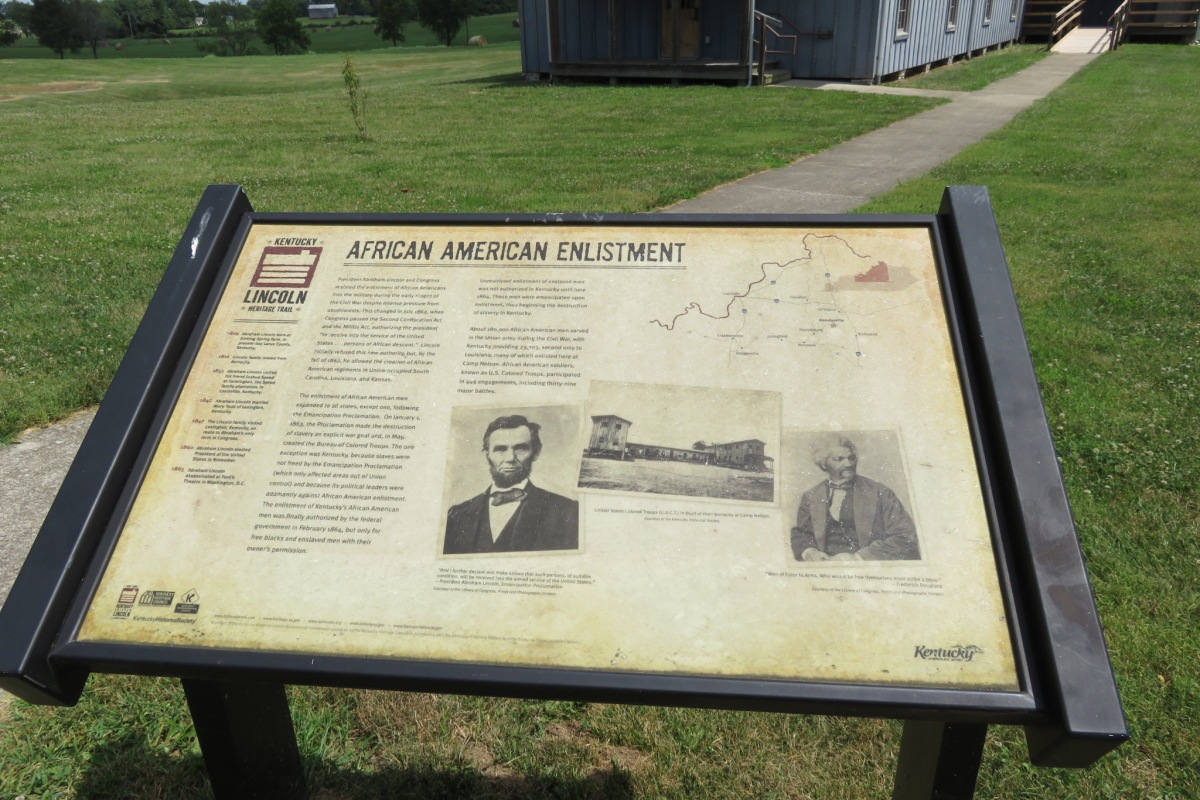 If I had done one post about both Mammoth Cave and Camp Nelson it would’ve been a very long one. So here I am with another dispatch about the east coast from the west coast 😊.

I don’t recall seeing Camp Nelson Heritage National Monument (CNHNM) on the NPS website when I started researching their units in Kentucky. This may be because it is one of the most recent sites to be protected by the US and added to the units under NPS management (site number 418). National monuments can either be established by presidential decree (under the Antiquities Act 54 U.S.C § 320301) or by Congress using other statutes.

Not all national monuments are managed by the NPS. Camp Nelson National Monument was established by presidential proclamation in October 2018. Legislation to change the name from Camp Nelson National Monument to Camp Nelson Heritage National Monument was signed in March 2019. At any rate when I reviewed the NPS website again as I was firming up the itinerary for the roadtrip, I saw CNHNM listed, realized it was relatively close to Abraham Lincoln Birthplace National Historical Park and started to read about it. When I read about the history of African Americans at the camp I needed no further convincing that it should be added to our itinerary.

I inserted this photo only because Major General Ambrose E. Burnside, who ordered the establishment of Camp Nelson, is the epitome (of the flipped version – sideburn) of his name . 😁.

I’m not a military history buff and would not have made the extra effort to visit Camp Nelson had it not been for the fact that in the American civil war, this camp recruited and trained more African Americans than any other in the nation with the exception of two. Over 10,000 African American soldiers joined the Union Army via Camp Nelson.

In Camp Nelson the enslaved saw the possibility of freedom by fighting for the Union, thus “thousands of slaves risked their lives escaping to this site with the hope of securing their freedom and, ultimately, controlling their futures by aiding in the destruction of slavery” (NPS, n.d.). Camp Nelson’s recruitment of the freed and enslaved also played an immense role in initially freeing the wives and children of African American soldiers and then abolishing slavery in Kentucky.

Camp Nelson is also recognized in 2008 as a part of the National Underground Network to Freedom (added in 2008).

Before being designated as a national monument, Camp Nelson Heritage Park was managed by Jessamine County and the Historic and Archeological District was a National Historic Landmark. CNHNM is Kentucky’s first national monument (Jessamine County Trails, n.d.) and was established to “preserve, protect, and interpret for the benefit of present and future generations, the nationally significant historic resources of Camp Nelson and the role of Camp Nelson in the American Civil War, Reconstruction, and African American history and civil rights” (Public Law No: 116-9, SEC. 2303.b.1). Read more about Camp Nelson’s history here https://www.nps.gov/cane/learn/historyculture/index.htm.

Since the monument is so new the NPS does not yet have a management plan in place. The creation of a plan is a priority and the planning process will include a range of stakeholder participation. Funding has been designated by Congress to prepare the plan and the NPS has 3 years from the funds being awarded to submit the plan to Congress. Creating and implementing a management plan and engaging stakeholders are critical elements of sustainability. I like that the former is required when federal protected areas are established and that the NPS takes the latter seriously, even though stakeholder participation extends and complicates the planning process.

From Abraham Lincoln Birthplace National Historical Park, to Mammoth Cave National Park, to Camp Nelson National Monument, African American history, indeed American history, resonated. I am neither African American nor American. I am a Black Woman from the Caribbean; a Bajan; a West Indian. But when I visit these sites where enslaved Africans toiled, where they bled and died, I feel the spirit of our common ancestors, the shared blood that runs through our veins. It is a powerful reminder that we are leaves and branches of the same deeply rooted tree.

I am proud of and humbled by what these African Americans did in times when their very survival and that of their families was under constant threat. I am beyond impressed by the resilience of the women: the mothers, grandmothers, wives, aunts, friends, etc. who stepped up (as usual) and did what needed to be done: built homes from scrap materials; protected, fed and clothed children and the vulnerable; built communities; resisted and fought when needed.

The history of the African Americans at these three sites in Kentucky is just the tip of the proverbial iceberg of how they contributed to the building of this state in particular and the US in general. How many more stories are yet to be discovered, revealed, and widely disseminated for each state and this country as a whole? I look forward to finding out and sharing what I find with you.

Once done with the exhibit and our ‘hike’ on Camp Nelson’s trails, it was time to hit the road yet again, this time our drive was about 3 ½ hours back to Nashville to catch our flight to L.A. It was of course delayed, because why would a flight be on time when you’ve had a long day? Once we were finally in the air the flight was uneventful and I was able to get some writing done. On the ground it took a while to get to our gate (or it seemed that way) so we could disembark and then too long to get my luggage. And we still had to get the shuttle from the airport to the station where we parked, which, you guessed it, took a long time.

After waiting at least 20 minutes for the Flyaway bus, an empty one passed (maybe the driver was off duty), more long minutes later a full one passed. Then finally came a third with enough empty seats to take all of us who were waiting at the stop. I probably got to my home around 2 am (5 am Eastern) and by then had been awake for almost 24 hours.

Having changed time zones at least twice, my Fitbit was again discombobulated and didn’t even recover once I landed in L.A. Hours later, after I had reset it a couple of times, it finally adjusted (somewhat). My logs for July 15th and 16th still show exaggerated steps and mileage because of the various time loops.

Next trip – Yosemite National Park, another site on my bucket list! Yay!